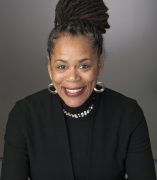 Head of the Department of Criminology, Law and Justice

Beth E. Richie is Head of the Department of Criminology, Law and Justice and Professor of
Black Studies at The University of Illinois at Chicago. The emphasis of her scholarly and
activist work has been on the ways that race/ethnicity and social position affect women
experience of violence and incarceration, focusing on the experiences of African American
battered women and sexual assault survivors.

Dr. Richie is the author of Arrested Justice: Black Women, Violence and America’s Prison Nation (2012) which chronicles the evolution of the contemporary anti-violence movement during the time of mass incarceration in the United States and numerous articles concerning Black feminism and gender violence, race and criminal justice
policy, and the social dynamics around issues of sexuality, prison abolition, and grassroots organizations in African American Communities. She is one of the editors of The Long Term: Resisting Life Sentences, Working Towards Freedom (2018) with collaborating teachers from Stateville Prison. Her earlier book Compelled to Crime: the Gender Entrapment of Black Battered Women, is taught in many college courses and is cited in the popular press for its original arguments concerning race, gender and crime. Dr. Richie is currently working on a new book titled Abolition. Feminism. Now. with Angela Y. Davis, Gina Dent and Erica Meiners.

Her work has been supported by grants from The Robert Wood Johnson Foundation, The Ford Foundation, and The National Institute for Justice and The National Institute of Corrections. She has been awarded the Audre Lorde Legacy Award from the Union Institute, The Advocacy Award from the US Department of Health and Human Services, and The Visionary Award from the Violence Intervention Project and the UIC Woman of the Year Award. Dr. Richie is a board member of The Institute on Domestic Violence in the African Community, The National
Network for Women in Prison, A Call To Men and a founding member of INCITE!: Women of
Color Against Violence. In 2013 she was awarded an Honorary Degree from the City University of New York Law School and in 2014 she was appointed as a Sr. Advisor to the NFL to work on
their gender violence prevention program.