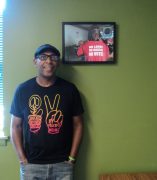 Dominic T. Moulden is the initiator of the Elephant Free School, a laboratory of Black imagination and freedom as well as a floating academy offering political education, coaching, and training. A community organizer in Washington, DC for over three decades, Dominic was the Resource Organizer for Organizing Neighborhood Equity (ONE DC), a collectively-led organization that builds people power and economic and racial equity in the nation’s capital. In that capacity Dominic recruited, trained, and coordinated a 34-member team to spearhead the successful campaign to raise $1.2 million for a building to permanently house the Black Workers and Wellness Center. He continues to organize in his hometown of Baltimore, where he is the 2020-2022 Lucille Gorham Fellow at VOLAR (Village of Love and Resistance), an equitable redevelopment and community wellness collective.

His most recent publications include “Housing Spaces Are the Commons,” a book forum response associated with Society & Space, as well as the co-authored article, “The Making of the Just City: Housing, Gentrification, and Health” that appeared in Housing Policy Debate. In addition, his writing appeared in Shelterforce's "What Does Community Control of Land Mean To You?" essay series in its State of Permanent Affordability issue.

Dominic is a frequent lecturer at various universities and conferences regarding equitable revitalization, cooperative economics, affordable housing, workplace democracy, community development, and public policy. Most recently he provided Tenant Opportunity to Purchase presentations for the New York State Anti-Displacement Learning Network; the Minneapolis City Council; and the Spanish speakers of Right To The City - West Coast. He was the keynote speaker for the Austin Justice Coalition’s event, “Return to the Common: Community Wealth Building and Public Space.”

Since 2018, he has been providing technical assistance and coaching to community organizations in one of the oldest Black communities in Memphis toward creating a community-controlled land trust. He was a community representative on the Board of the DC-based New Columbia Community Land  Trust and developed several housing cooperatives among them--Spirt of W Street, Voices of Madison, and Malcolm X Cooperatives as living examples of community control of land and housing.

He served as the Urbanist in Residence as well as inaugural Ernest Thompson Fellow for Program and Coalition at the University of Orange Free University (UofO) in Orange, New Jersey--and continues to focus on inequitable development and the culture of health as a former Interdisciplinary Research Leader Fellow with the Robert Wood Johnson Foundation.

Dominic is also a community-accountable photographer and social justice documentarian. His work has been exhibited most recently in the FenZoul Gallery in Baltimore as well as the U of O’s Fighting For What We Love photo and art exhibit. At the Maryland Institute College of Art his teaching focuses on the fusion of art-making, critical theory, and community organizing strategies.