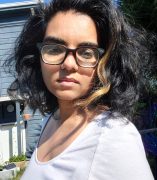 Organizer in the Sunrise Movement

Aru Shiney-Ajay (she/her) is an organizer in the Sunrise Movement, a movement to win a Green New Deal that creates millions of jobs, invests in black, brown, and working class communities, and stop the climate crisis. Aru was raised in Minneapolis, Minnesota, in an Indian immigrant household with deep ties to the Global South.  From a young age, she began organizing around human rights violations and anti-war efforts.

Aru joined the climate movement in the fall of 2016, when she joined and eventually led her school’s fossil fuel divestment campaign. From there she became involved in Sunrise, initially as a volunteer and then in 2019 as the national Trainings Director, where Aru oversaw the curriculum development for and training of tens of thousands of Sunrise leaders in movement strategy and organizing skills. Aru now oversees Sunrise’s “re-frontloading”: a strategic planning process to ask what movement we need to build in order to win a Green New Deal and transform our society, and how to build it.

In her free time, Aru loves to take wandering walks, read in the sun, and stay up late talking to friends.