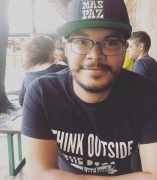 Director of the Center for Popular Economics

Francisco Perez (@Platanomics) is a solidarity economy activist, educator and researcher currently pursuing a PhD in economics at the University of Massachusetts at Amherst. He is the Director of the Center for Popular Economics, a nonprofit collective of political economists whose programs and publications demystify the economy and put useful economic tools in the hands of people fighting for social and economic justice. Francisco has worked on social and economic development projects in Brazil, the Dominican Republic, Guinea, Senegal, Sierra Leone, the US and Venezuela. His research focuses on the political economy of the CFA Franc, a currency union of fourteen West and Central African countries.