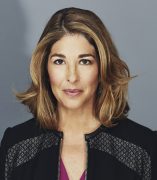 Naomi Klein is the author of seven bestselling books which have been translated into over thirty languages and are critical to our understanding of systemic inequities, capitalism, and climate. These include On Fire: The (Burning) Case for a Green New Deal (2019), a New York Times bestseller and a #1 Canadian bestseller; No Is Not Enough: Resisting the New Shock Politics and Winning the World We Need (2017), a New York Times bestseller and nominated for the National Book Award; This Changes Everything: Capitalism vs. The Climate (2014), which was awarded the 2014 Hilary Weston Writers’ Trust Prize for Nonfiction and named an Observer ‘Book of the Year,’ and in the New York Times Book Review ‘100 Notable Books of the Year;’ The Shock Doctrine: The Rise of Disaster Capitalism (2007), which was awarded the inaugural Warwick Prize for Writing and appeared as a New York Times Critics’ Pick of the Year; and No Logo: Taking Aim at the Brand Bullies (2000), elected by TIME and The Guardian as one of the Top 100 Non-Fiction books.

In 2017, Klein became Senior Correspondent for The Intercept and she is regular columnist for The Nation and The Guardian. Klein is a Puffin Writing Fellow of Type Media Center. Recent articles have also appeared in The New York Times, The New Yorker, The Boston Globe, The Guardian, the London Review of Books and Le Monde.

Klein’s work has supported some of the most powerful social movement organizations of the current moment. She is one of the organizers and authors of Canada's Leap Manifesto, a blueprint for a rapid and justice-based transition off fossil fuels, which has inspired similar climate justice initiatives around the world. Klein is now a co-founder and advisory board chair of The Leap, a climate justice organization developed from the Manifesto that exists to inject new urgency and bold ideas into confronting the intersecting crises of our time: climate change, racism and inequality. Previously Klein was a member of the board of directors for climate-action group 350.org.

Klein is the inaugural Gloria Steinem Endowed Chair in Media, Culture and Feminist Studies at Rutgers University. The recipient of various recognitions, Klein was awarded the 2016 Sydney Peace Prize. In 2019 Klein was named one of the The Frederick Douglass 200, a project to honor the impact of 200 living individuals who best embody the work and spirit of Douglass designated by the Frederick Douglass Family Initiatives and the Antiracist Research and Policy Center at American University.